The third wave of the opioid epidemic shows steady rise in overdose deaths. 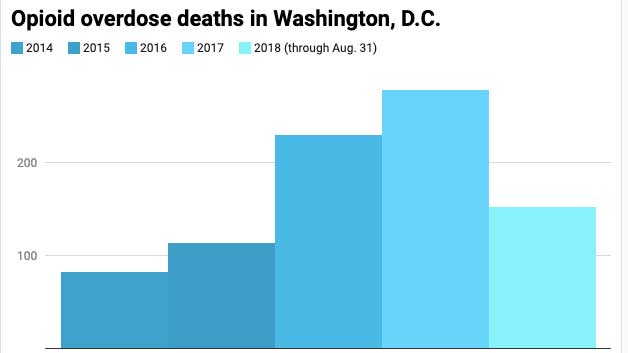 *This story was originally handed in for an in-class assignment on May 2, 2019.

Dr. Randi Abramson, the chief medical officer at Bread for the City, says opioid users in Washington talk about fentanyl all the time. Users tell her, and other doctors, that their friends are dying and that they are afraid. People who have been safely using heroin for decades are now fearful that their opioids could be tainted with fentanyl, marking a new and deadly phase of the national opioid epidemic.

Described by health professionals and historians as the third wave of the opioid crisis, overdoses involving fentanyl – a highly potent synthetic opioid – now account for about 81 percent of current opioid-related overdose deaths in the District of Columbia as of November 2018, according to a report by the Office of the Chief Medical Examiner.

That same report said that the annual number of opioid-related overdose deaths in Washington more than tripled between 2014 and 2017, from 83 to 279. In the last four years, 337 people in Washington have died from fentanyl overdose.

Doctors like Abramson at Bread for the City, a nonprofit organization that offers services for opioid users in Washington, said that the recent flood of fentanyl into the District is creating a trauma within the community. Abramson said the fear is “visible,” in meetings with her patients, and that they wonder if they could be next.

“Before, they weren’t scared,” Abramson said.

Fentanyl is not a new drug, but according to Dr. Stephanie Peglow, who works with the Virginia Department of Behavioral Health and Developmental Services, its role in recent overdose deaths across the United States can be attributed to its potency, its cheap manufacturing costs and the difficulty in its detection.

In an interview, Peglow said that fentanyl is a highly potent opioid with fast-acting pain-relieving effects. Because it packs a more powerful effect in a smaller dose, it is often used as a cutting agent with heroin. This makes fentanyl useful for traffickers that want to reduce the volume of shipments without impacting the potency of their product.

“If you used to need a very large suitcase of heroin that would supply, let’s say, a thousand people, you could now supply those a thousand people with the same effect with a handbag size, or smaller, of fentanyl,” said Peglow.

According to Peglow, the problem with mixing fentanyl and heroin is not only that it increases in the number of opioids entering vulnerable communities, but also that it is virtually impossible to detect without proper testing equipment.

“Even the most trained user of opioids cannot detect the difference between fentanyl and heroin until it’s used. … It’s white and powdery, and it’s indistinguishable,” said Peglow. “Not only are they not aware if they’re taking fentanyl, they’re not aware how much fentanyl is in it.”

Matthew Pembleton, a historian and professor at American University who has written for the D.C. Policy Center on the history of opioid use in the District, said that the opioid crisis in Washington has a “much different character” than other parts of the United States.

“You’ve got this population of older black men who have been heroin users, steady heroin users for a long time … but had settled into, like, a rough equilibrium. It seems like most of them are working, most of them are housed. Then all of a sudden, you’ve got fentanyl, and they’re not prepared for it,” said Pembleton.

In fact, 82 percent of all overdose deaths in Washington are African-Americans, according to the 2018 medical examiner’s report. The deaths primarily occurred in the eastern part of the city, with Wards 5, 7 and 8 seeing the highest rates of overdoses.

“It’s not a white rural thing anymore, it’s very much something that’s happening to people of color and in cities,” said Pembleton.

Former user Jennifer Dorsey said that the main issue that must be addressed is addiction itself.

Dorsey was 16 when she went to a recovery center for alcohol and drug misuse. Although she said that she did not stop using immediately after her rehabilitation, the experience “planted a seed” that helped her on her road to recovery.

“We were really a broken family as a result of my addiction,” Dorsey said.

Dorsey said that her time in residential treatment inspired her to not only overcome her addiction and “get clean,” but also to begin working at recovery centers to show users that anyone has the ability to recover. Dorsey is now the regional clinical director for Kolmac Outpatient Recovery Centers’ office in Washington, as well as the organization’s offices in Maryland cities Gaithersburg and Silver Spring.

In order to effectively address the opioid epidemic in Washington, nonprofit organizations like Bread for the City have implemented programs such as syringe exchanges and addiction recovery services. They are in the process of introducing a system to provide fentanyl testing strips to heroin users that are patients at their medical clinic to reduce overdoses.

Vanessa Peter, leader of Bread for the City’s syringe exchange, said an important facet of their initiative is developing a familiarity with clients who utilize clean needles and addiction recovery resources provided by the nonprofit.

By building a familiarity with their regular patients, Peter said Bread for the City emphasizes the intersection between medical issues and social stability.

Washington’s city government is addressing the epidemic through education and awareness, but also through increased policing.

Mayor Muriel Bowser has proposed a program aimed to halve opioid overdose deaths in Washington by 2020, with language citing the necessity of “effective law enforcement strategies” in combating opioid, and specifically fentanyl, overdoses.

Abramson at Bread for the City remains unconvinced:

“This is definitely a healthcare issue, it’s not a criminal issue. … It’s not locking people up, there are not laws we need to change this: you’re never going to change this through the legal system.”

Hailing from Waldoboro, Maine, Braeden Waddell is a junior at American University studying Journalism and Latin American area studies. Waddell is an avid podcast listener, an aspirational chef, and a two-wheeled transportation enthusiast currently suffering a minor setback. His long-term career goal is to work as an investigative reporter for a podcast similar to Post Reports, Reveal, or In The Dark. His choice to attend American University was inspired by desperate need to leave his 5,000-person town in rural Maine and enjoy the benefits of modernity he lacked at home, such as a cable internet and being able to go to a grocery store without seeing upwards of five people from his high school. Fun fact: Waddell only learned to ride a bike 3 weeks ago. Fun fact 2: While Waddell loves to cook, he is less knowledgeable with the art of baking. He can only bake one thing: Banana Bread. But, it’s damn good banana bread. View all posts by Braeden Waddell